The Palmetto Wine Competition seeks to promote awareness of the twenty plus commercially licensed wine, mead, and cider producers of South Carolina. This year the competition is to be held at Carter’s Steak and Seafood Restaurant in Inman, South Carolina.  The 2020 panel consist of eight highly qualified judges from many different sectors of the wine industry.

We remain grateful for the support of our sponsors! Their generous support allowed us to purchase brand new wine glasses for the benefit and safety of our judges.

We have two Gold Level Sponsors. Carter’s Steak and Seafood in Inman, South Carolina which serves as our host site. Carter’s has served up sizzling steaks and fresh seafood near the banks of Lake Bowen since 2014. The restaurant features a relaxed family oriented environment and a full service bar. We are utilizing the restaurant’s meeting room which accommodate from 50 to over 100 people.

Our other Gold level sponsor is WineryEscapades.Com. The website and blog of our organizers, which seeks to market the regional craft wine industry. 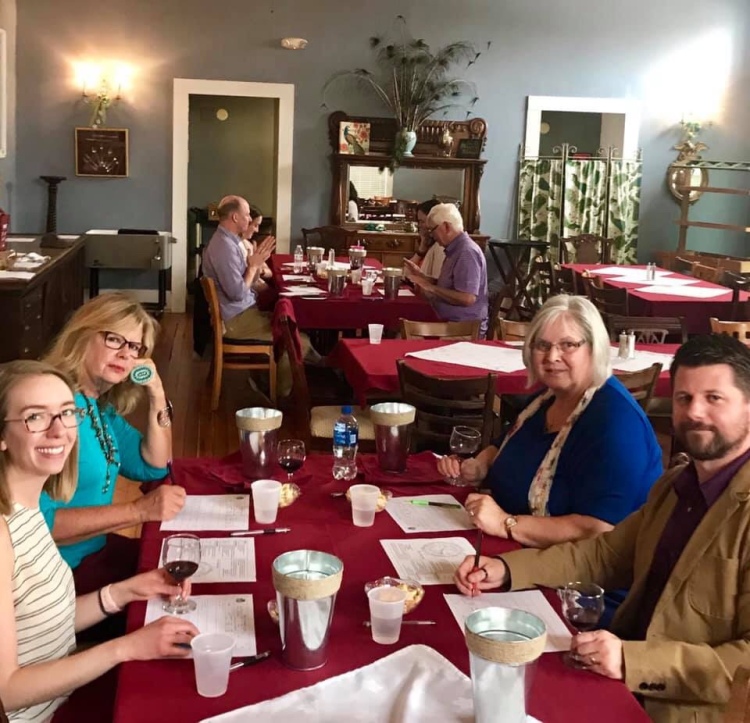 David serves as one of our two head judges. This is his third year judging the Palmetto Wine Competition. His extensive experience includes judging four Asheville Food & Wine Competitions, four Mid-Atlantic Southeastern Wine Competitions, and two North Carolina State Fair Competitions. David continues his wine education as a board member of the French Broad Vignerons and served as a former board member of Chestnut Mountain winery in North Georgia. He is certified as an American Wine Society judge. David resided in the California Wine Region for twenty-five years where he assisted at Donatoni Winery in Paso Robles, and since moving to Western North Carolina he most recently assisted at Mountain Brook Winery in the Tryon Foothills.

Annmarie serves her third year as a judge and second as a head judge for the Palmetto Wine Competition. She is the proprietor of the Vines to Wine Academy, CSW member of the Society of Wine Educators, and a member of the American Wine Society. Annemarie graduated from the Deutsches Wein-Institute in Germany, has studied with the Wine Scholars Guild, WSET level 2, and studying for WSET level 3. She grew up in the business as her family for generations has owned vineyards and produced wine in the Pfalz region of Germany. She has extensively explored wine regions both abroad and domestically.

Ryan is back to serve his second year as a Palmetto Wine Competition judge.  Ryan is a level 2 Certified Sommelier and a Certified Cicerone. He has served many capacities in the beverage industry including a recent stint as the resident Sommelier at Overmountain Vineyards in the Tryon Foothills. Ryan has worked for the Sommelier Company in California and as a wine educator for The Fresh Market. Ryan has also previously served as a wine judge in Miami Beach Wine and Food Festival.

Nancy is back to serve her second year as a Palmetto Wine Competition judge. Originally developing her love of wine in France, she has honed her expertise as a Regional Wine Expert through extensive exploration of the Northern Virginia, North Carolina, South Carolina, Georgia, and Texas wine regions. Her background is in education and she continues to refine her palate by participating in multiple regional wine clubs. She has volunteered to assist at several regional wineries and has further participated and studied at many wine educational summits.

Tom explored the Bernkasteler Doctor vineyard on the banks of the Mosel on his 21st birthday during a college summer study trip to Europe. He and wife Nancy eventually landed as full-time residents in the DC area during the peak boom of the Northern Virginia and Maryland wine region. They have extensively explored the fledgling wine industries of Maryland, Northern Virginia, North Carolina, South Carolina, Georgia, and Texas. Upon settling in Greenville, South Carolina, the two have committed to multiple regional wine clubs and continue to support the local craft wine industry as Regional Wine Experts. Tom served as our Head Wine Steward in the 2019 Palmetto Wine Competition.

Wayne is back to serve his second year as a Palmetto Wine Competition judge.  He honed his skills extensively exploring wine regions in Italy and California. He has recently developed an appreciation for regional American Viticultural Areas. His love for wine was kindled growing up in an Italian family and by joining a wine club in college. He is an avid collector of wines from all over the world and continues his education as a member of the French broad Vignerons.

Dathan has extensively explored the regional world of craft wine, beer, and food along with his wife Jennifer. He is a veteran journalist and graphics editor focusing on the food and beverage market. Dathan has won multiple awards for his page designs. He is an experienced competition judge previously serving as a judge in many events, including the Got To Be NC Dining Series, Lucy Daniels Cooking for a Classic, Hops for Hope, Make it Exotico Cocktail Competition, and Pepperfest by Abundance NC.  He has served as a host for many wine tastings and educational forums, and as guest speaker at the NCWine Bloggers Summit. He and wife Jennifer publish the popular blog Triangle Around Town. Dathan continues his education as a member of the American Wine Society and the French Broad Vignerons.

Jennifer has extensively explored the regional world of craft wine, beer, and food along with her husband Dathan. Jennifer earned bachelor’s degrees in Business Administration and Computer Information Systems and is currently working towards her graduate certificate in Geographic Information Systems. She is an experienced competition judge previously serving as a judge in many events, including the Got To Be NC Dining Series, Lucy Daniels Cooking for a Classic, Hops for Hope, Make it Exotic Cocktail Competition, and Pepperfest by Abundance NC.  She has been guest speaker at the NCWine Bloggers Summit and has hosted several wine tastings and educational events. She and her husband Dathan publish the popular blog Triangle Around Town. Jennifer continues her education studying with the Wine and Spirit Education Trust and as a member of the American Wine Society and the French Broad Vignerons. 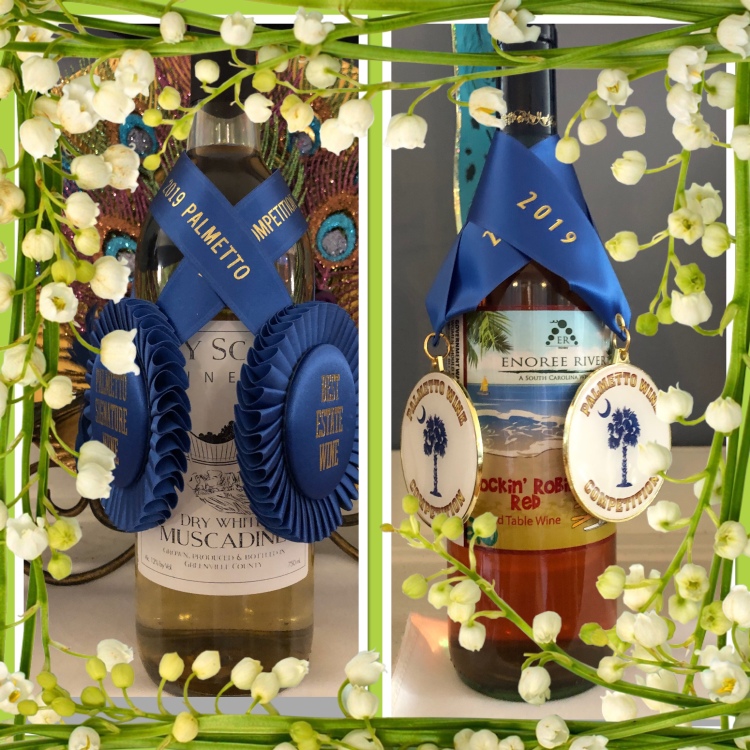 Dennis is an International Business graduate of the University of South Carolina, a Certified Hard Cider Competition Judge, and a self-anointed Cab Sauv snob. Jenni is a voice major educated at Winthrop University and Converse College. She is a former board member and vice chair of the Spartanburg Repertory Opera Company.

Dennis and Jenni are members of the French Broad Vignerons and the American Fruit Wine Alliance. Dennis and wife Jenni, reside in Boiling Springs, South Carolina. 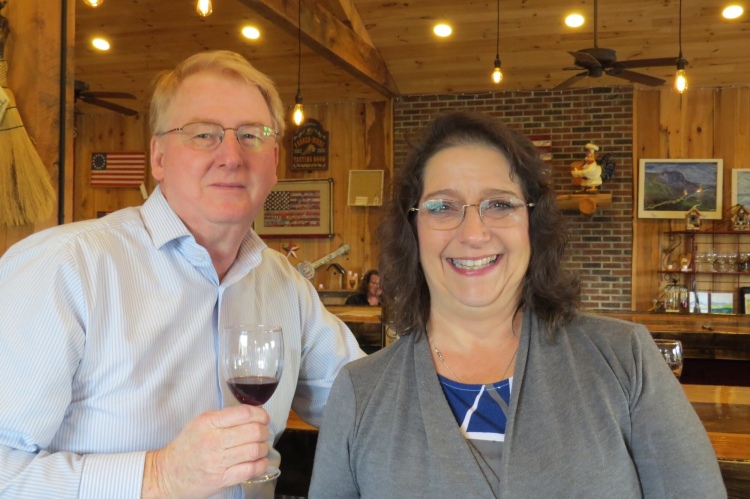 Judging is by blind tasting and wines will be scored utilizing a modified American Wine Society twenty point scale. Our judges will implement the five S technique, see, swirl, smell, sip, and spit. Each wine is judged on its own merit, not against other wines in the competition.

Promoting Fun at Local Wineries It's safe to say our hobby has turned into an obsession. What started as a way to spend time together, has turned into a way of life. Our ultimate goal is to promote fun at local wineries. We love our weekend escapades, invite us to visit and blog about your winery, antique store, b&b, or other destination. We are brand ambassadors, promoting fun at local wineries and our reach is through social media, industry contacts, this website, and most importantly word of mouth. Thank you for visiting our website and reading our blog. Happy Weekend Wining! View more posts