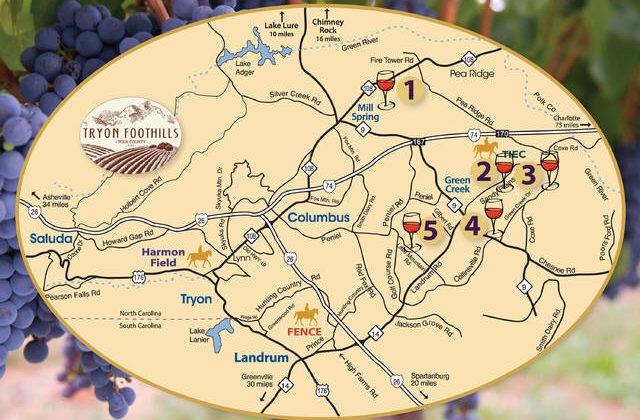 A new listing recently showed up on the TTB’s List of Pending American Viticultural Area Petitions.

The list which is regularly updated, consist of only those AVA petitions accepted as “perfected.” The term perfected in this use, precisely means the petition meets the requirements to be designated as an American Viticultural Area.

While several regulatory steps remain and gaining official recognition is not guaranteed, the final stages are usually considered in general a mere formality. However, it can take up to an year for the final approval to be granted.

The current List of Pending American Viticultural Area Petitions includes eleven Proposed new AVA’s in California, one in Washington, one in Ohio, two in Tennessee, and the Tryon Foothills in North Carolina.

The proposed AVA will be inclusive only of Polk County.

The Tryon Foothills petitioner is listed as Cory Lillberg of Parker-Binns Vineyard and Winery.

Currently 258 official AVA’s are established by the TTB. California has the most with 142 established AVA’s.

Direct from the TTB. Gov website – An American Viticultural Area, or AVA, is a specific type of appellation of origin used on wine labels. An AVA is a delimited grape-growing region with specific geographic or climatic features that distinguish it from the surrounding regions and affect how grapes are grown. Using an AVA designation on a wine label allows vintners to describe more accurately the origin of their wines to consumers and helps consumers identify wines they may purchase.

It has been said, an AVA is the recognition of the pedigree of a wine growing region.

Even more so, the designation brings credibility to the wine region as being unique and special. The designation then gets placed on wine maps and list touting the numerous wine regions in the U.S.A., which in turn generates tourism from traveling wine lovers. The benefits are truly multi-faceted.

We’re still waiting for the petition to be posted in the TTB reading room. Once that becomes public, we’ll explore the many reasons why the Tryon Foothills region is very worthy of an AVA designation!